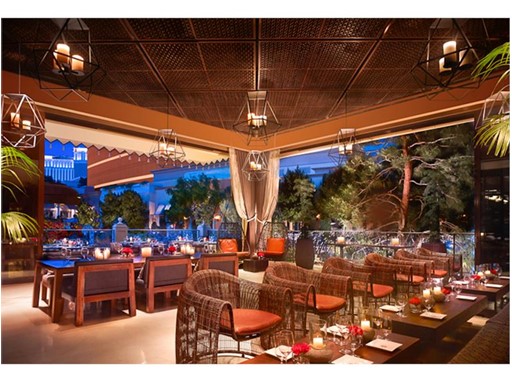 In December 2010, La Cave Wine and Food Hideaway was introduced inside Wynn Las Vegas. Inspired by the Latin phrase “in vino veritas” (in wine there is truth), La Cave offers an escape where guests can enjoy a modern American small plates-menu from Executive Chef William DeMarco. Global wines were selected by Rober Wright, La Cave wine director.
The wines at La Cave will surprise and please connoisseurs and novices alike. Guests can sample 50 wines by the glass, arranged in tasting flights or from the enomatic machine in two, four, and six ounce pours.
“La Cave’s wine list offers a variety of wines that encourage guests to approach wine from a fresh perspective and explore new varietals,” Wright says.
Open for lunch, dinner and late-night indulgences, La Cave’s menu features an array of international influences to complement Wright’s wine pairings. The menu is divided into categories based on the dishes’ origins: From the Sea, Farm, Oven, Garden, Grill, Butcher, and cheeses From the Cow, Sheep or Goat. Flavorful flatbreads such as ham, egg and cheese with quail eggs and Neuskes bacon are ideal for sharing, while vegetable dishes including salt roasted beets with whipped goat cheese and pistachio entice meat and veggie lovers alike. Creative seafood dishes including hamachi with pickled chilies and candied lemon zest join poultry and meat options such as filet crostini with torched blue cheese and truffle cream sauce. Dishes from the grill such as Angus mini burgers with mushroom and chipotle mayo further round out the menu and satisfy cravings. In addition, guests can select from a variety of meats and cheeses to create their own charcuterie board.
Designed with 555 International, La Cave is comprised of three distinct spaces—“the cellar,” main dining room and garden lounge. Guests are greeted by a glass entryway surrounded by rich wood panels. The cellar features cobblewood oak flooring, low vaulted ceilings and a large sign made of red LED lights that reads “In Vino Veritas.” An arched steel-metal gate features Latin phrases celebrating food, wine and the arts, evoking the feeling of an exclusive wine cellar in Tuscany while providing a glimpse into the main dining room.
Spacious and low-lit, the dining room boasts a center bar outfitted in a herringbone pattern and bookmarked by two wine rooms. A ten person “share table” features a walnut table that allows for intimate wine tastings and special events. The garden lounge recalls an oversized living room with mix-and-match custom-made chairs and tables, at which guests can unwind with a glass of wine and small plates from DeMarco.
At La Cave, guests will find a one-of-a-kind destination that invites them to experience the meaning of in vino veritas in a sophisticated yet relaxed setting.
William DeMarc Executive Chef
William DeMarco is the executive chef of La Cave, Wine and Food Hideaway at Wynn Las Vegas, where he serves flavorful modern American dishes that are ideal for sharing and pairing with the global wine selection. DeMarco was previously executive  chef of The Buffet at Wynn Las Vegas, where his diverse skill set and kitchen experience helped the restaurant garner accolades including “Best Buffet in Las Vegas, 2009” from The Las Vegas Review Journal.
The Long Island, New York native was introduced to the restaurant industry at an early age, as his family owned a popular local pizzeria. DeMarco loved the fast paced kitchen environment and the sense of conviviality encouraged by spending time with family, eating good food and drinking wine. He began his path towards a culinary career by enrolling in the Florida Culinary Institute. After graduating in 1998, DeMarco moved back to New York and was soon invited by Sam DeMarco to become executive chef of his three restaurants–First, Merge and District—where he won fans for his updated twists on classic dishes.
Four years later, in 2003, DeMarco accepted the opportunity to work as the executive sous chef at the landmark Manhattan restaurant, River Café. During his two year tenure, DeMarco was inspired by executive  chef  Brad  Steelman’s  knack  for  applying  inventive  touches  to  straightforward  American cuisine, and expanded his own repertoire by experimenting with new ingredients and flavor combinations. In 2005, DeMarco packed his bags to work at the then newly opened Las Vegas location of the celebrated Manhattan restaurant Aureole.  Located at Mandalay Bay, Aureole allowed DeMarco to further hone his craft and introduced him to The Strip’s vibrant culinary scene.
One year later, DeMarco joined Wynn Las Vegas as executive chef of The Buffet, the popular dining destination that elevates the all-you-can-eat concept to a gourmet experience. There, DeMarco oversaw 16 cooking stations to offer guests a breadth of international selections at breakfast, lunch and dinner. In 2010, restaurant impresario Michael Morton partnered with Steve Wynn to create the wine and food hideaway La Cave and invited DeMarco to sign on as executive chef. At La Cave, DeMarco serves small plates, oven fired flatbreads and charcuterie that draw on an array of international influences and reflect his fun, straightforward approach to dining.